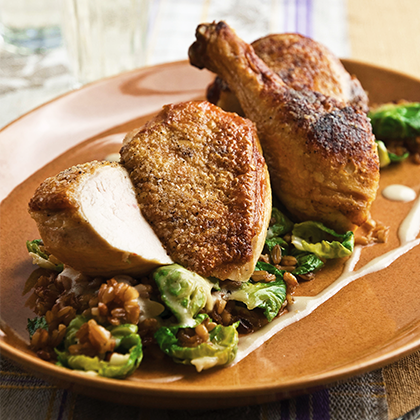 Introduce a new staple to your family’s menu with Chef Kevin Gillespie's Cast-Iron Skillet Chicken with farro and brussels sprouts.

3 cloves garlic, shaved on a mandoline

1 clove garlic, mashed to a paste, about 1 teaspoon

2. Soak the farro in the water for 30 minutes. Drain off the water and rinse the grains with cold water. Put the farro in a 2-quart saucepan and add enough fresh cold water to cover. Bring to a boil, then cut the heat down to low, cover, and simmer until tender yet still chewy, about 20 minutes. Drain off any excess liquid and spread the farro on a baking sheet to cool. You should end up with about 2 cups of cooked farro.

3. Meanwhile, peel off the outer green leaves of the Brussels sprouts until you have 4 cups. Reserve the inner heads for another use.

4. Cut up the chickens into leg-thigh and breast-wing portions with the skin still attached. For each leg-thigh portion, bend the leg away from the body, cut down to the joint, then bend the joint to break it. Cut between the ball and socket, then down around the carcass to remove the entire leg-thigh portion. For each breast-wing portion, cut down along one side of the breastbone, then run the knife along the contour of the rib cage and around the wishbone to begin removing the breast from the body. When you get to the joint connecting the wing to the body, grab both wing and breast together and cut through the wing joint to remove breast and wing in one piece. Score the meat around the next wing joint closest to the breast, cutting down to bone and scraping with the knife so the bone is fairly clean. Bend the joint to break it and remove the wing. The resulting boneless breast with the first wing bone attached and exposed is called an airline breast. It looks nicer than the boneless breast by itself, and the wing bone helps keep the meat moist during cooking.

5. Cut off any excess flaps of skin and pat the chicken very dry with a paper towel. Generously season the chicken on all sides with salt and pepper. Heat two large cast-iron skillets over medium heat. Add enough grapeseed oil to coat the bottom of each pan. Put the chicken legs in one pan, skin side down, and put the breasts in the other pan, also skin side down. Crank the heat up to medium-high and cook until the skin is nicely browned, about 4 minutes. No need to peek; just let the chicken cook undisturbed. When the skin is browned, it will release easily from the pan and the meat will start to pull away from the bone. Turn the leg-thigh portions and cook for 1 more minute skin side up, but let the breasts cook skin side down the entire time.

6. Place both skillets in the oven and roast for 5 minutes. Carefully pull out the pan with the legs, turn the legs skin side down once again, and return to the oven for 3 more minutes. The breasts will still be skin side down, remember; they do not get turned at all. After a total of 8 minutes, carefully pull both skillets from the oven, transfer the chicken to a large plate, and tent with foil to keep warm.

7. Using mitts, carefully pour out and discard the accumulated fat from the pans. Heat one pan over high heat until smokin’ hot. Add the cooled farro to the pan, spreading to evenly cover the bottom (save any leftover farro for another use; it makes a great salad). Again with the mitts, grab the handle and shake and toss the farro so it heats through evenly. After about 3 minutes, the farro will begin to caramelize and puff. Add the Brussels sprout leaves and stir nonstop for 1 minute. Add the garlic and warm chicken stock, then shake and toss the mixture for 2 more minutes, until almost all of the liquid is gone. The farro will absorb the stock and release its starch to thicken the remaining liquid, creating a creamy mixture.

8. Stir in the olive oil, lemon juice, a pinch of salt, and any accumulated chicken juices from the plate. Taste and adjust the seasonings as needed; with all that lemon juice in the farro, the dish screams for salt to balance it out.

9. To serve, drizzle a circle of tahini sauce in the center of the plate, and top with a scoop of farro and a chicken breast and leg.

1. In a medium bowl, whisk the tahini, 2 tablespoons lemon juice, the garlic, and salt until the mixture is very thick or “tightened.” It will get so thick that you’ll have trouble stirring it. Keep stirring; your arm will get tired, but keep stirring for about 2 minutes.

2. Slowly whisk in just enough water—2 to 3 tablespoons—to bring the tahini back to its original spoonable consistency.

3. Slowly whisk in the olive oil until the mixture is smooth. When you taste the sauce, you should detect a dry bitterness with a touch of acidity. If the sauce tastes flat or overly bitter, add a little salt and just a drop of honey.

4. Store tightly covered in the refrigerator for up to 3 months. Bring to room temperature before serving. 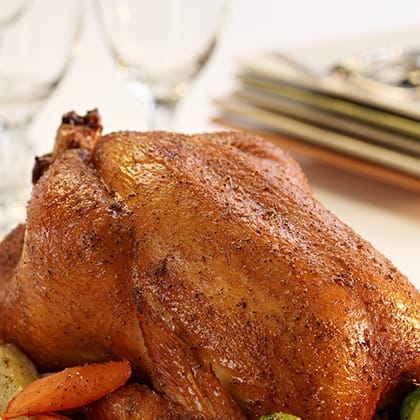